The Uganda Hotel Owners Association (UHOA) has called on travel agents and tourism businesses in the United Arab Emirates (UAE) to put Uganda at the top of their customers’ travel itineraries, saying the country is one of the major tourist destinations in Africa.

And one of the reasons given is the friendly and welcoming people of Uganda.

“Ask your clients to try visiting Uganda, with the friendliest and most welcoming people they have ever met, you can attest to that from a few of us with whom you interacted here and others working in the country,” Jean said. Byamugisha, the executive director of UHOA.

She was speaking to more than 60 travel agents during an engagement at the Grand Excelsior Hotel in Dubai on Wednesday. It was organized by Uganda Airlines.

The airline has invited travel agents to let them interact with stakeholders in the tourism and hospitality industry in Uganda with the aim of enticing them to book their customers on the national carrier.

The airline also wants to attract more tourists from the UAE and the Middle East in general by allowing them to learn more about Uganda.

Byamugisha, among others, spoke of Uganda’s rich cultural diversity which includes fresh organic foods, such as grasshoppers (nsenene), which she says is one of Uganda’s delicacies. 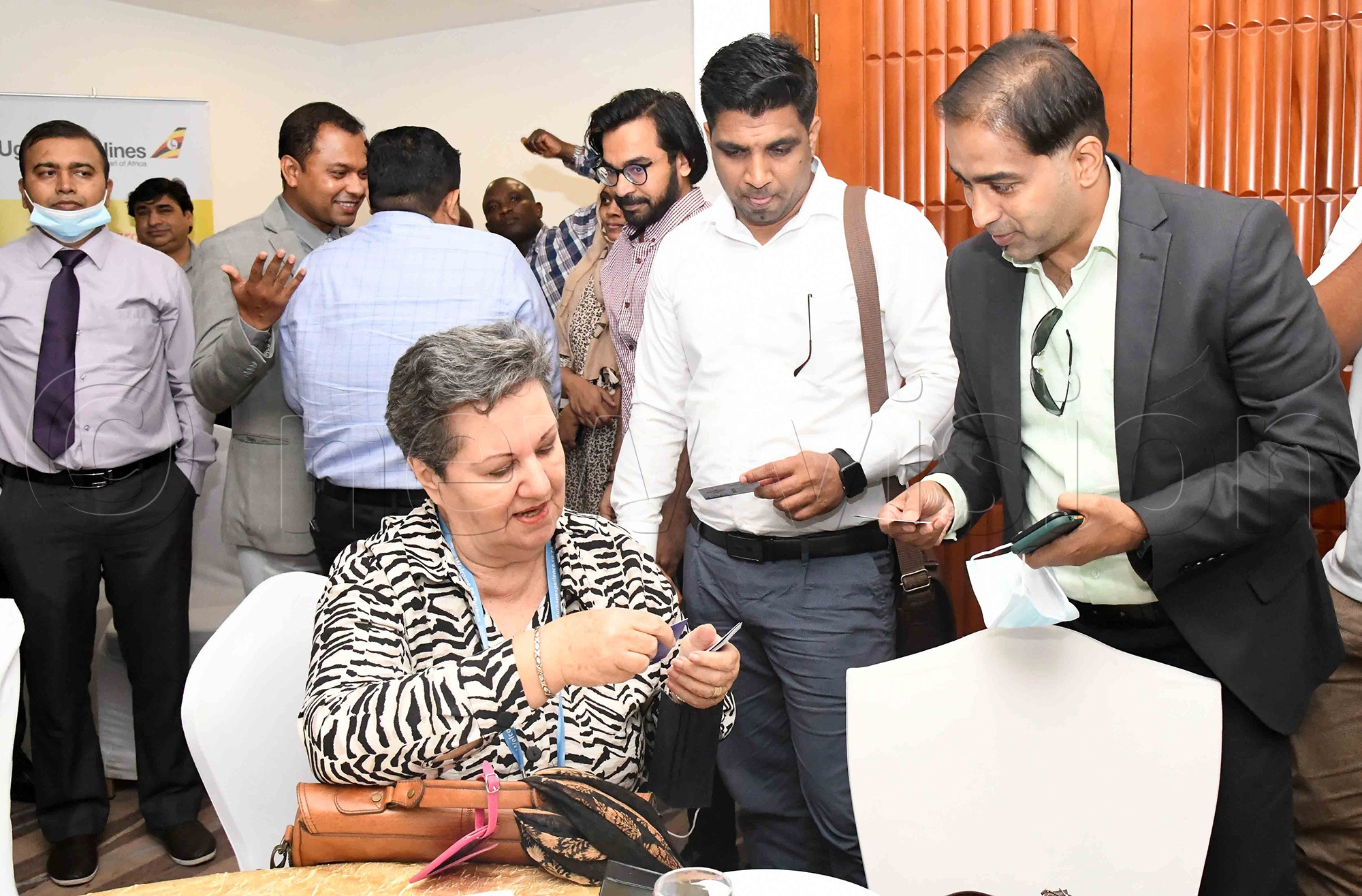 She gave a presentation on “Destination Uganda” and opportunities in the tourism and hospitality sector.

She told guests that Uganda is the home of the famous long-horned Ankole cows that have been adopted as a new animal species, which are a tourist attraction at a zoo in the US state of Philadelphia.

Uganda is the source of the Nile, the longest river in the world with a total length of 6,650 km and originates in Lake Victoria, one of the largest inland water bodies. 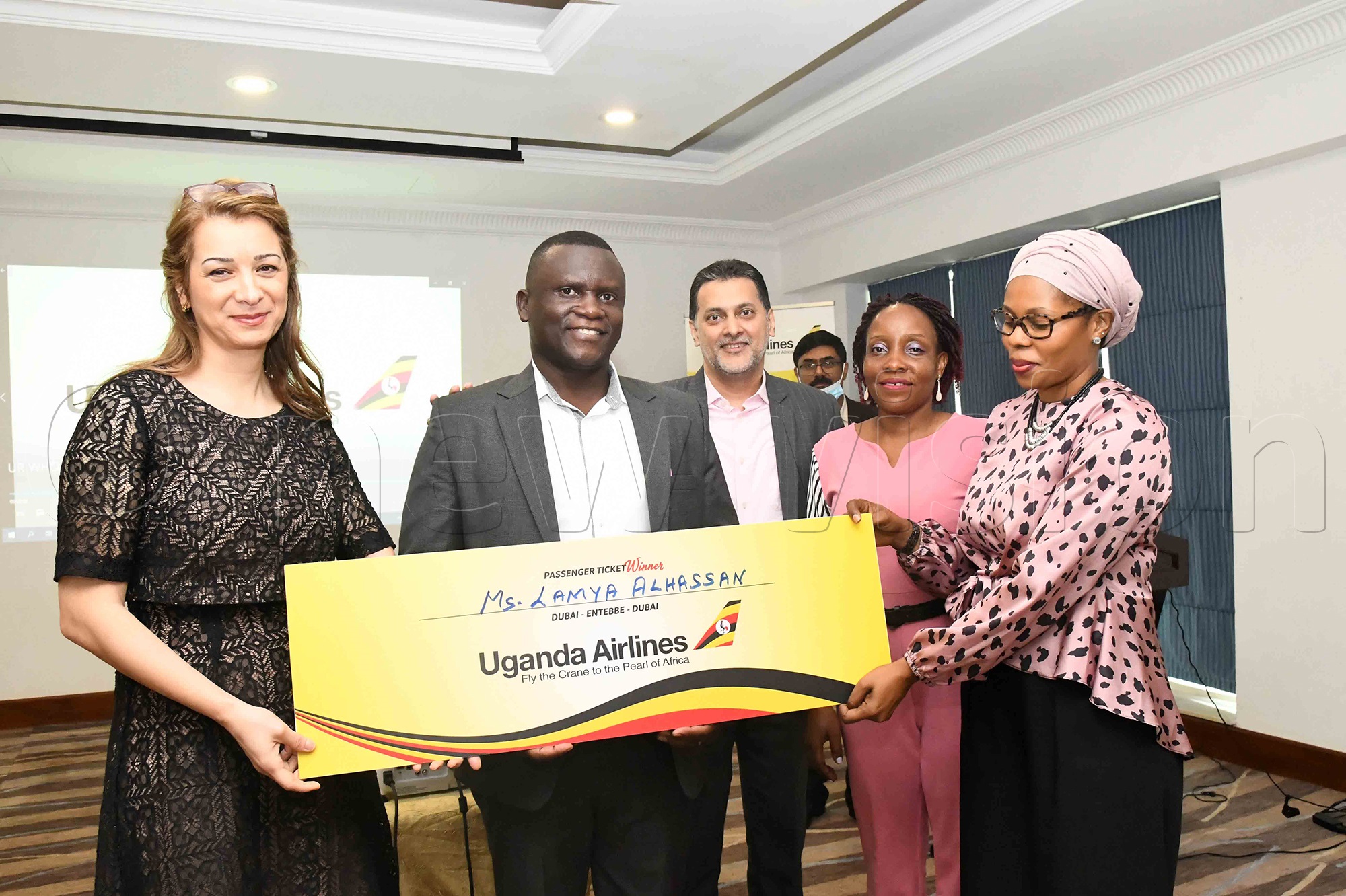 Moses Kisembo (second from left) hands a dummy ticket to Lamya Aluassan (L), one of the travel agents who won a raffle at the function

“We also have incredible wildlife, which you can’t find anywhere else in the world, including tree-climbing lions, and home to half of the world’s population of mountain gorillas,” she said.

She called on travel agents to partner with stakeholders in Uganda to penetrate the Middle East market, saying tourism is Uganda’s biggest foreign exchange earner.

According to the Executive Director of UHOA, travel agents in the UAE, who often have an influence on the choice of travel destinations for their clients, should also help market Uganda to potential investors, especially in the tourism sector.

“Our government has an open door policy for investors in Uganda. We have a lot of tax incentives through the Uganda Investment Authority, and we have a very big gap in luxury accommodation as well as in the eco-tourism sector in Uganda,” she said. 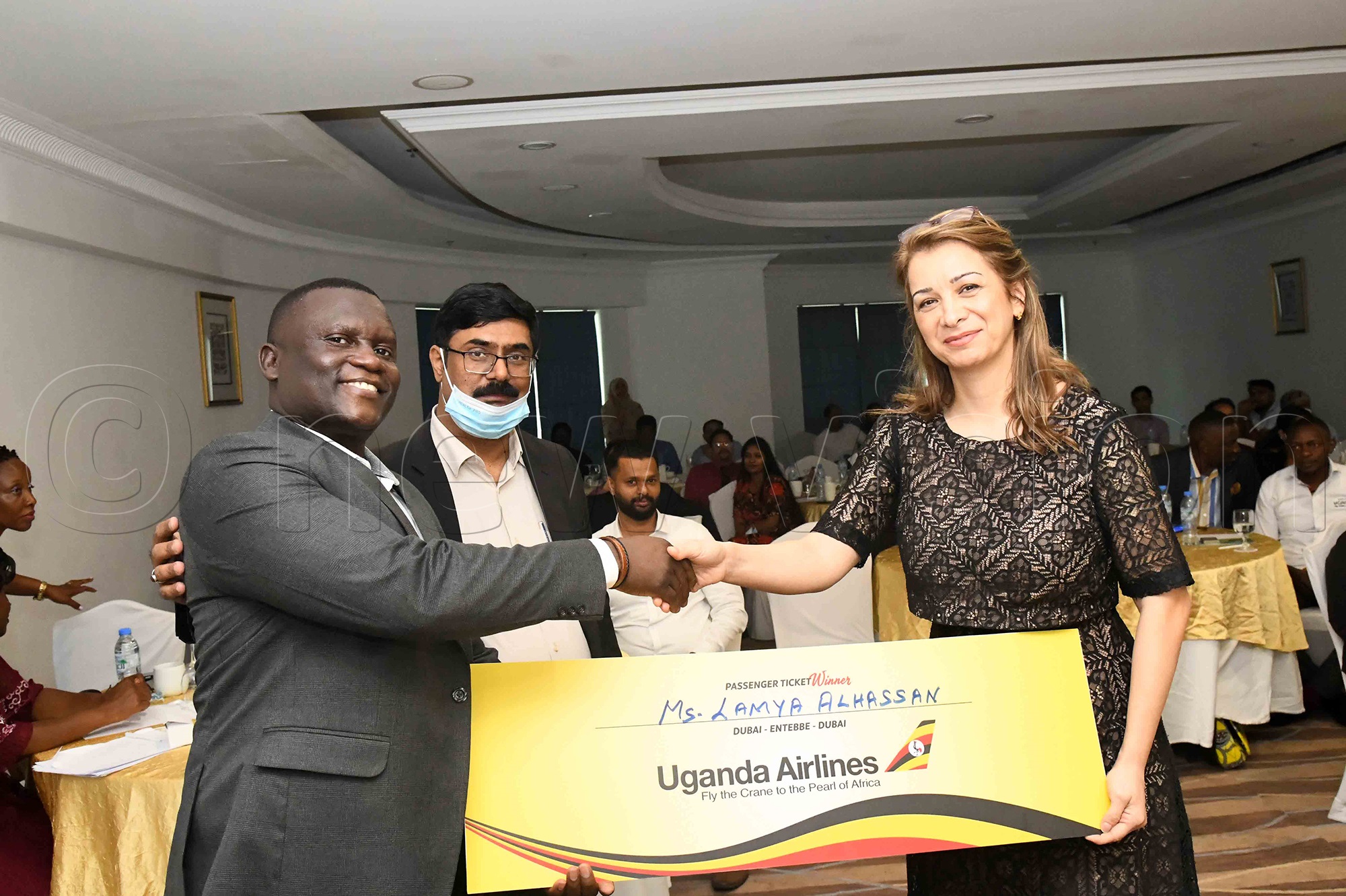 Moses Kisembo (L) hands a dummy ticket to Lamya Aluassan, one of the travel agents who won a raffle at the function

Byamugisha said Uganda is one of the top destinations for MICE (Meetings, Incentives, Conferences and Exhibitions) in Africa and needs to attract more UAE meetings.

Uganda Airlines UAE director Moses Kisembo told officers that anyone planning to fly to Uganda should book the company’s new Airbus A330-800.

He said it is safe, reliable, with a hospitable crew and competitive prices and meets international standards.

The workshop was attended by Shakila Rahim, Uganda Airlines Spokeswoman, Christine Isanga and other officials from the national airline.

Download logo Turkish Cooperation and Coordination Agency (TİKA), Ministry of National Education of the Republic of Turkey and Namibia University of Science and Technology (NUST) organized the “Training on Current Approaches to tourism education” in Windhoek, the capital of Namibia. The ceremony took place in the presence of Berin Makbule Tulun, Ambassador of the Republic […]

The P&O Australia cruise liner, Pacific Explorer, is the first to make a return to Australia since a ban triggered by the Covid-19 pandemic in March 2020. The $400 million liner, which has a capacity of nearly 2,000 passengers, arrived in Sydney on Monday morning. The ABC showed the ship docking surrounded by tugboats, with […]